Questions like the ones above fall into a domain called hypothesis testing. Hypothesis testing is a way of systematically quantifying how certain you are of the result of a statistical experiment.

In the coin example the "experiment" was flipping the coin 100 times. There are two questions you can ask. One, assuming the coin was fair, how likely is it that you'd observe the results we did? Two, what is the likelihood that the coin is fair given the results you observed?

Of course, an experiment can be much more complex than coin flipping. Any situation where you're taking a random sample of a population and measuring something about it is an experiment, and for our purposes this includes A/B testing.

Let's focus on the coin flip example understand the basics.

The most common type of hypothesis testing involves a null hypothesis. The null hypothesis, denoted H0, is a statement about the world which can plausibly account for the data you observe. Don't read anything into the fact that it's called the "null" hypothesis — it's just the hypothesis we're trying to test.

All of this is perfectly quantifiable, of course. What constitutes "enough" and "safely" are all a matter of statistics.

So, we have a coin. Our null hypothesis is that this coin is fair. We flip it 100 times and it comes up heads 51 times. Do we know whether the coin is biased or not?

Our gut might say the coin is fair, or at least probably fair, but we can't say for sure. The expected number of heads is 50 and 51 is quite close. But what if we flipped the coin 100,000 times and it came up heads 51,000 times? We see 51% heads both times, but in the second instance the coin is more likely to be biased.

If instead we saw 1 head for 100 flips that would be another story. Intuitively we know that the chance of seeing this if the null hypothesis were true is so small that we would be comfortable rejecting the null hypothesis and declaring the coin to (probably) be biased.

Say you have a set of observations O and a null hypothesis H0. In the above coin example we were trying to calculate

Remember our random variables from before? If we let

But by the central limit theorem we also know that p approximates a normal distribution. This means we can estimate the standard deviation of p as

Our null hypothesis is that the coin is fair. Mathematically we're saying 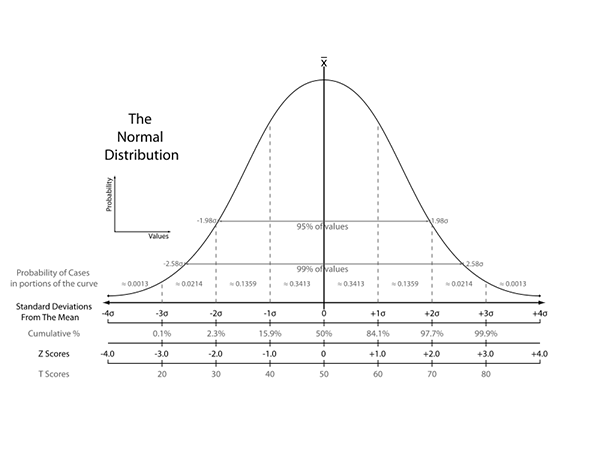 A 95% level of confidence means we reject the null hypothesis if p falls outside 95% of the area of the normal curve. Looking at that chart we see that this corresponds to approximately 1.98 standard deviations.

The so-called "z-score" tells us how many standard deviations away from the mean our sample is, and it's calculated as

Let's say we flipped three coins 100 times each and got the following data.

When your test statistic meets the 95% confidence threshold we call it statistically significant.

Hypothesis testing is a way of systematically quantifying how certain you are of the result of a statistical experiment. You start by forming a null hypothesis, e.g., "this coin is fair," and then calculate the likelihood that your observations are due to pure chance rather than a real difference in the population.

The null hypothesis can be any mathematical statement and the test you use depends on both the underlying data and your null hypothesis. In our coin flipping example the underlying data approximated a normal distribution and we wanted to test whether the observed proportion of heads was different enough to be significant. In this case we were measuring the sample mean.

We can measure anything, though: the sample variance, correlation, etc. Different tests needs to be used to determine whether these are statistically significant, as we'll see in coming articles.

Now that we understand the innards of hypothesis testing we can apply our knowledge to A/B tests to determine whether new features actually effect user behavior. Until then!