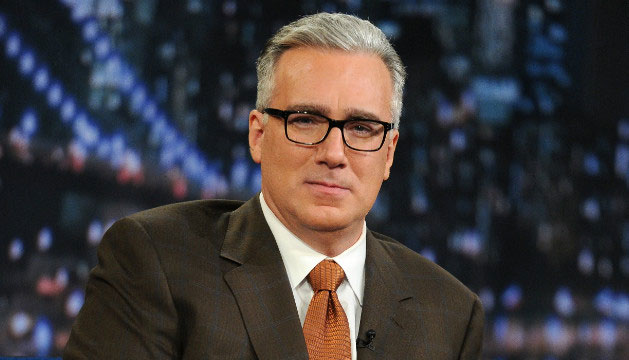 This story ends with Keith Olbermann dismissing me as "another idiot" on national television, but it begins on a Monday morning with me sitting on my brown leather IKEA couch in Palo Alto, two blocks from Facebook's then-new College Terrace office. Five months earlier I started company with Matt Humphrey, Joe Damato, and Aman Gupta called Bumba Labs.

Our first application, Polls, let anyone on Facebook create or vote in a poll on Facebook. When someone voted they were prompted to post their response to their newsfeed, where all their friends could see it. That was enough to make it grow exponentially, and within a month there were millions of people voting. Over 10,000 polls were created each day. Even Mark Zuckerberg used our app to create a poll about Gidget, the Taco Bell dog, who had died earlier that year. Not a bad start.

By the end, Facebook, the Secret Service, and every major news station would be involved.

I sat down on my couch, opened my laptop, and logged on to Facebook to see how our application was doing.

The application "Polls" is temporarily unavailable due to an issue with its third-party developer. We are investigating the situation and apologize for any inconvenience.

That's the message I saw when I visited our application that morning. "Today is going to be awesome!"

Every successful Facebook developer has seen that message at least once. It means Facebook found something they didn't like in your application and decided to take it down. Normally they'd warn you a few days in advance and tell you to fix it or else. I double-checked my email and, nope, no warning — the app was just gone.

It would take Facebook at least a day to respond to any questions I had, so in the meantime I connected to the Polls database to see if I could spot anything unusual. At Facebook's request we had implemented a feature to report offensive polls a few months earlier, and now took time each morning to spot and delete any truly awful polls.

People would report a poll for anything, offensive or not: the poll's prompt didn't agree with their politics, there was a typo in one of the answers, the poll's photo offended them, etc. For most polls there was one report every hundred votes or so, but today there was a poll with only a few hundred votes and thousands of reports. 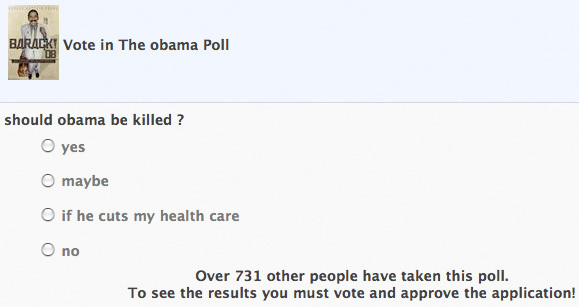 The Best Laid Plans: 10AM

I knew in my gut this is why Facebook shut down our application, but it was still strange that they hadn't warned us. Playing dumb, I sent an email to someone I knew on the Facebook policy enforcement team.

Our users had created horrible polls in the past, asking questions like "Should gay people be lynched?" or "Is Mrs. Jones the English teacher at such-and-such High School a racist?" We'd delete those polls as soon as we found them and ban whomever made them from ever using Polls again. In this case, the poll was created by a middle school girl from Orange County, California. She'll be graduating from high school this year.

This looked less like someone earnestly plotting to kill Obama and more like a bored kid phoning in a fake bomb threat to their high school. Thankfully, only a few hundred people voted in the poll — the truly viral polls had millions of votes. How did Facebook find this if it had so few votes, though? It took at least several thousand votes over the previous hour to break into the list of popular polls, and nobody outside Bumba saw the complaints.

I decided to wait until Facebook got back to me before I did anything else. The poll was removed, the provocateur banned, and hardly anyone had voted in the poll.

I left Palo Alto to spend the day working in San Francisco out of Matt, Joe, and Aman's apartment.

And there it was on the Huffington Post. And the Associated Press Wire. And all over the blogosphere.

After a bit of digging we found "patient zero," a small liberal blog called The Political Carnival. They started a campaign late Sunday evening to call Facebook, the FBI, and the Secret Service, which quickly spread to larger communities like DailyKos. One problem: nobody seemed to understand the difference between Facebook, developers on the Facebook Platform, and Facebook users creating polls with our app. They were blaming Facebook for hosting the poll and us for creating it!

The poll was created Sunday morning, discovered by a single blog Sunday evening, and had become a national news story by the time I woke up Monday. Nobody had reached out to us yet, either, so most articles about the poll were filled with wild speculation. Left-leaning outfits assumed the person who created it was a middle-aged white man out to kill Obama. Right-leaning outfits assumed this was a liberal plant, designed to make the right look bad. Everyone tried to weave this incident into a larger story about race, politics, and the direction of American society.

I wondered if they would be embarrassed to know that their outrage was unknowingly directed at a 14-year-old girl. Did they even know how to feel embarrassed?

Eric Eldon and Justin Smith from Inside Network were the first people to reach out. Eric had been a journalist in Silicon Valley for several years, so he understood how hard it was for any site to police user-generated content. His writeup at Inside Facebook was the most level-headed account by a mile or ten.

The second person to reach out called with no warning. I assumed it was a journalist trying to catch me off guard, but instead the caller replied: "This is Special Agent Mark Weller from the United States Secret Service, San Jose office." Because of their location, he told me, they work with Facebook and other Silicon Valley companies all the time, and were used to dealing with complaints about user-generated content. I gave him the identity of the girl who created the poll and we ended the call in under 15 minutes.

Self-deprecating, sarcastic humor being my default coping mechanism, I tweeted the following:

Life TODO: [X] Have a phone conversation with an agent from the US Secret Service

After I got off the phone with Agent Weller I immediately called Bumba's lawyer: "I'm not sure they'll send one, but don't be surprised if you get a subpeona from the Secret Service. I gave them your fax number." The call every lawyer wants to receive.

From Would-be Assassin to Idiot

Once my name was out there, the coverage escalted. I was getting unprompted calls from reporters wanted to talk to "the polls developer." People would email me asking why I wanted to assassinate Obama. When I explained that I actually worked on the Obama campaign in 2008, their brains melted. It just didn't fit into the story they had been telling themselves since the news broke.

Here are some selected pieces of coverage:

The best part came Tuesday night, though. My phone rang. It was my mother. Her voice was hurried and cracking a little. Before I could ask what was wrong she blurted out, "Jesse, Keith Olbermann just called you an idiot on national television." She was concerned this would hurt my reputation.

I went through the Countdown transcripts and read his refreshingly thoughtful commentary:

This as the fallout continues over that poll from Facebook. It continues. The Secret Service is now investigating the threat. And the developer of the online application that was used to create the survey has come forward, telling "Politico" "there is definitely a culture of paranoia and fear, and I think both sides are reacting in extreme ways. People carrying guns to town hall meetings. That's scary. People losing their cool over an internet poll like this that doesn't calm the situation."

Posting such a poll cools and calms the situation? Another idiot.

Thanks to Keith, I finally recognized my own idiocy and spent the next four months at an "idiot detox" center in eastern Oregon.

Later that week the Secret Service announced they had investigated the lead and found no credible threat. By then the media had moved on to the next banal controversy that could generate outrage and attention, so hardly anyone noticed.

I'll stop myself from commenting on the "state of the media" and such. It's cliché at this point to say that people like Keith Olbermann and the bloggers who first broke this story aren't interested in the truth, but instead their own aggrandizement. (Oops.)

Community sites like DailyKos were better at understanding what happened, especially after I took the time to patiently answer all their questions.

As for the fallout, Polls was down throughout this episode. Because it spread virally by posting people's votes to their newsfeed, the three or four days of down time halted all growth. Traffic dropped to nothing and never recovered. It wouldn't have mattered much, anyhow, because three months later Facebook changed how the newsfeed worked and made it nearly impossible for apps to grow through the newsfeed alone.

The four of us shut down Bumba about a month later. Matt, Joe, and Aman, along with Jared Kopf, went on to start HomeRun. It was at this time, too, that Matt introduced me to Michael Preysman, a friend of his from CMU. Less than a year later Michael and I started Everlane.

In fact, here is the very first email I ever sent Michael:

I sure know how to make a graceful first impression.