The logistic curve comes from population biology where the growth of a population has an exponential component, e.g., humans on average have 2.1 children each, but is dampened by competition for resources. If the population is growing too fast eventually it reaches the limit where their environment can no longer support pure exponential growth.

This upper limit is called the carrying capacity.

Seth Godin misses this in his otherwise excellent Elephant Math essay. He equates "perfect viral growth" with exponential growth, but no viral growth is exponential. There are two variables at play: the rate of reproduction and the carrying capacity. 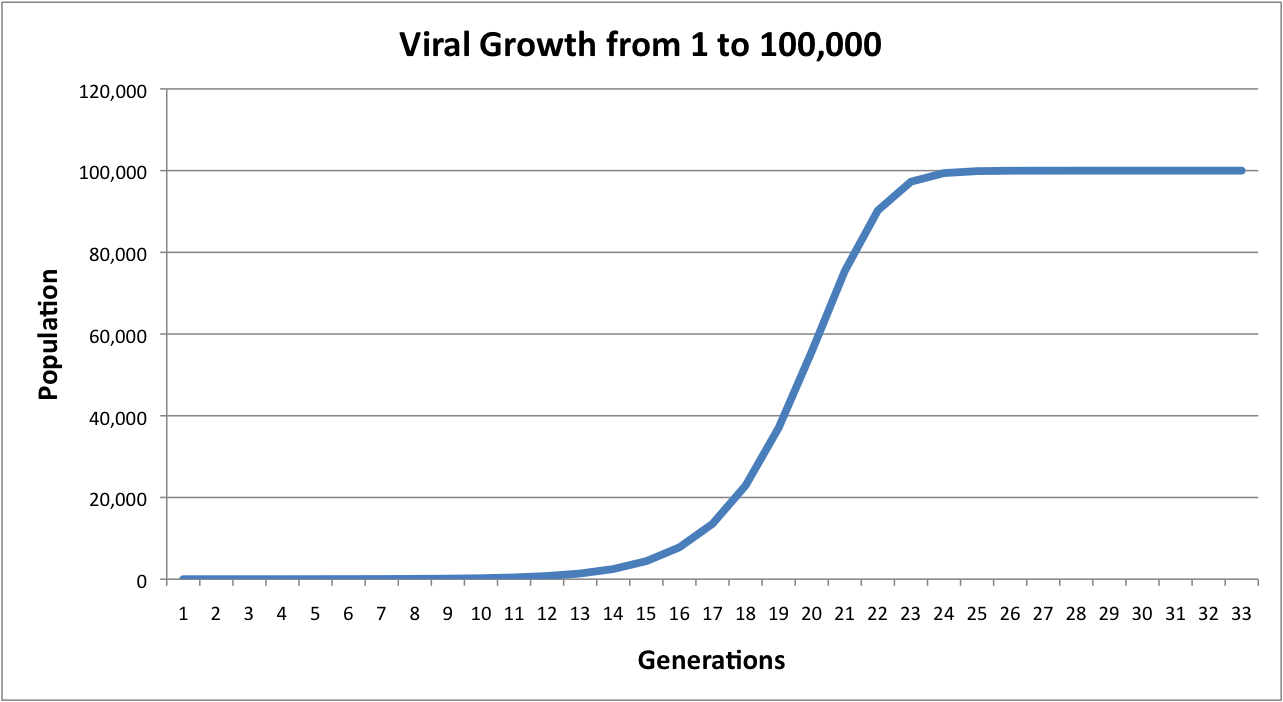 This is what happens to every viral product, whether you like it or not. Viral growth slows and you have to worry about retaining users rather than acquiring new ones. If you don't your product runs the risk of jumping the shark.

And here's the kicker: the faster your app is growing the sooner you have to care about retention because you reach the carrying capacity much more quickly.

Viral growth isn't a marketing buzzword, although I won't say marketers don't occasionally misuse the word. It has the potential to happen any time you're in a situation where people can communicate.

In simple terms viral growth happens when a user comes across your product and recommends it to his friends. If the average user recommends the product to more than one person you get viral growth.

What most people don't understand is that viral growth is also a function of the viral substrate, or the underlying communication medium. The easier it is to communicate with other people the more likely something is to go viral.

With modern technologies like email, Facebook, SMS, etc., communication is virtually frictionless. I could send an email to 1,000 people right now if I wanted, or text ten of my best friends simultaneously. What's more, these channels are actually easier to measure than word-of-mouth recommendations.

Instead marketers use vague terms like "word of mouth marketing." But every step in the viral process can and should be measured, and you should use mathematical models (like the logistic growth curve, above) to understand what is really happening.

Viral growth is one of many distribution strategies and that means it can be engineered. Innovation in distribution might be boring, but it makes the difference between a K-Mart and a Wal-Mart.

Here is an example, taken from KISSMetrics' Product Planner:

Simply put, your viral loop is the series of steps a user goes through before he invites his friends. Each step in the loop costs you users. Perhaps only 10% of users click the "accept invitation" link, for example. The efficiency of the funnel is the percentage of users who make it all the way through the funnel.

One of fundamental equations of viral growth is

Phrasing it like this makes "getting viral" into an optimization problem, one that you can A/B test.

Viral growth can be measured, tested, and modeled. It's not a fuzzy marketing term. And if you can do it right you'll have yourself a difficult-to-top distribution channel for your next product.